Why use AeroShell Grease 33?

For many years aircraft operators have been seeking to rationalise the greases used on aircraft and to reduce the number of different greases in their inventories. Recently Boeing began research on a new, general purpose, corrosion-inhibiting grease. The aim was for a non-clay based grease that would provide longer life for components and mechanisms and possess improved wear and corrosion resistance. This led to the introduction of the new Boeing Specification BMS 3-33.

Owing to the wide range of operating temperatures, loads and other environmental conditions required for various aircraft components, several different types of grease with different desirable properties are used during routine lubrication of aircraft components. Boeing, in developing their BMS 3-33 specification, took account of the properties of the different grease types used on aircraft and wrote a specification for a grease which would provide improved performance and which could be used in the widest possible range of grease applications.

Shell worked closely with Boeing during the development of BMS 3-33 and formulated AeroShellGrease 33 to meet the improved performance properties required by this specification. It was the first, and for several years the only, grease approved to BMS 3-33. AeroShell Grease 33 is also approved to the MIL-PRF-23827C specification.

AeroShell Grease 33 can be used for routine lubrication in applications where MIL-PRF-23827C is specified on aircraft manufactured by McDonnell Douglas, Airbus Industrie, BAe Regional Aircraft, Fokker and Gulfstream (except for wheel bearings, applications above 121°C and sliding applications requiring molybdenum disulphide).

Other aircraft manufacturers, such as Canadair, Saab and Lockheed are evaluating AeroShell Grease 33 with the aim of approving it for use on their aircraft. Operators should regularly check with these manufacturers for the latest status. 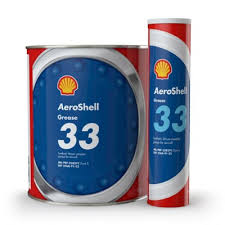